How to set up an NGO in Cyprus.

By: Christophoros Christophi April 27, 2022 no comments

How to set up an NGO in Cyprus.

What is a non governmental organization (NGO)

The term non governmental organization, in short NGO, is not defined anywhere, but it typically  refers to a voluntary group or institution with a social mission, which operates independently from the government. Such entities are by nature, non profit.

What is the legal regime to register and operate an NGO in Cyprus?

In Cyprus there are 3 options to register an NGO.

The first 2 are regulated by the Clubs and Foundations Law ( Law (104(I)/2017) and they are the Club and the Foundation.

The third option is to register a non profit company under the Companies Law.

There are some differences between the three vehicles that are explained below.

The Club is governed by the Law and its constitutional documents.

A Club serves public purposes and must not have a commercial or economic purpose.

It is also important to note that any movable or immovable property given before or after the formation of the Club belongs to the Club and not to the donors or members. In case of dissolution of the Club , the property is not distributed to the members.

A Club must have at least 20 members that sign the incorporation documents.

The management of the Club is undertaken by the Board of Directors which must be composed of at least 5 members unless otherwise stated in the constitution of the Club.

The decisions are taken with simple majority of the present members of the Board of Directors, unless otherwise stated in the constitution of the Club.

The Club must prepare and file audited accounts every year with the Registrar of Clubs, which is under the responsibility of the Ministry of Interior.

The registering authority for Clubs is the Registrar of Clubs which is under the Ministry of Interior.

An approximate time for registration of a Club, based on our experience, is between 1 to 3 months.

A Foundation is established for the purpose to manage for non profit purposes a property or asset that is donated to the Foundation.

The administration of the Foundation can be taken over by Commissioners or the Board of Directors appointed by the founder or founders. The manner of their succession must be specified in the articles of association and after the Foundation has been established it must be clear to the founders that they themselves cannot subsequently change the Commissioners or the Board of Directors.

A Foundation is managed by three (3) or more persons and, unless the constitution provides otherwise, their decisions are taken by a simple majority of the members present and, in case of a tie, the vote of the president prevails.

The members Foundation have the obligation to keep accounting books, in which are recorded all the transactions of all transactions of the Foundation, as the case may be, and to prepare the following accounts at the end of each financial year.

The registering authority for Foundation is the Registrar of Clubs which is under the Ministry of Interior.

An approximate time for Foundation registration , based on our experience, is between 1 to 3 months.

Registration of a non-profit company under the Companies Law

Non-profit companies are established and registered under the Companies Law, Cap 113.

The objects of the company to be incorporated must relate to the promotion of commerce, art, science, religion, charity or any other community interest purpose.

It is important to noted that the company’s profits if any or other revenues must be used for the promotion of the company’s objects and the company must prohibit the distribution of dividends to its members. The company’s memorandum of association must explicitly state that it is a non-profit company.

The company’s memorandum of association must explicitly state that in the event of the company’s dissolution, any surpluses shall be distributed exclusively to non-profit community interest organisations, with objects similar and/or comparable to the objects of the company under dissolution.

Α non-profit company is managed by the Board of Directors.

A non- profit company must file audited accounts with the Registrar of Companies every year.

The registering authority for a private company limited by guarantee is the Department of Registrar of Companies.

The time to register a non profit company is around 2 weeks.

A graphical representation of the key characteristics of NGOs is provided below. 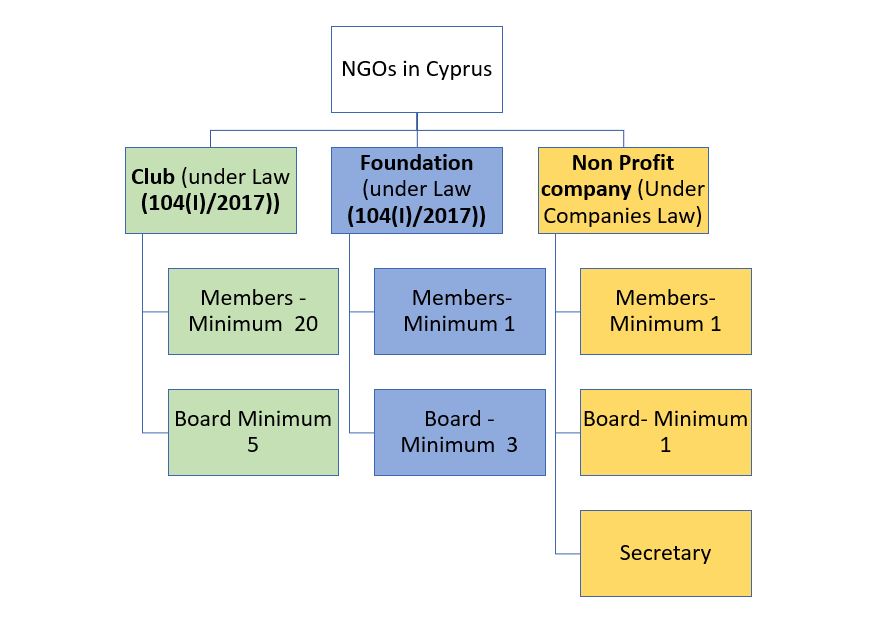 For more information as to procedure and costs,  send us an email by clicking here.

Citizenship by naturalization
Cyprus citizenship by marriage.
Deadline to register to the UBO Registry extented to 31/07/2022
Annual governement levy for 2021- Extension for payment till 31st March 2022